Elizabeth and Kate were excited when the mailman pulled up in front of their house. It wasn’t unusual for the mailman to pull up and drop off Grandma AND the mail at the same time.  Grandma had not learned to drive, so she had become clever in figuring out how to get around when Grandpa was at work.   Esther’s daughter lived 7 miles down the narrow country road from her own home, so when she got lonesome for her daughters company, she would go out across the street from her own home and stand by the cluster of mailboxes on the road.  When the mailman came along and saw her there, he would respond with “Sure, Esther, hop in!” when she asked if she could hitch a ride to her daughters home.  Hitch hikers the world over had nothing on Grandma Esther.  She would get in the mail truck and ride along, enjoying watching him deliver mail along the way.  She would even put the mail in the mailboxes for him  which was fun and almost made her feel like his assistant.  Without doubt, only in the very rural countryside in the the 1950’s could this kind of an arrangement be made.

The girls heard the squeaking brakes of the mail truck when the mailman slowed to a stop in front of their house.  Grandma gingerly stuck her leg out and stepped down unto the grass to one side of their mailbox.  She turned to thank the driver as he handed her the mail for her daughters home.   She waved as he drove off,  then turned and made her way up to the house.

Elizabeth and Kate loved their Grandma in a big way.  They could not remember a time when she wasn’t in their life.  She was a soft sell for things they wanted.  No one in the area had all that much in the way of money or material goods in those days, so it wasn’t that they were always asking for things, for they just knew better.  It only when one of them might want a new bathing suit before the old one was completely worn out.  If they appealed to their Mother, she would tell them that it wasn’t time and that it made no sense to buy something new to replace something old that was still good.  But, Grandma was different.  If they appealed to her, she would listen and not offer any promises whatsoever.  However, a week or two later, when they happened to be visiting her, she would tell Grandpa she needed a ride into town to buy some things she needed to restock at the house. The girls would ride along and then, while in town, Grandma would steer them into the local Kresge’s department store and tell them to go ahead and look for a new swimsuit and if they found something they liked to bring it to her and she would pay for it.  “Not the most expensive one, mind you, nor the least expensive one……just use common sense” she’d say.  They respected her command about pricing and each found one that was really cute at a moderate price.  With hearts fluttering, they would bring their prized suit to Grandma and she brought it to the checkout counter and pay for it.  Once they had completed all the errands they came to town to accomplish, Grandma and Grandpa would always stop at the local ice cream shop to buy each of the girls an ice cream cone for the trip back home.  This was the ultimate treat because in those days people didn’t buy treats very often.  Most everything was made at home.

They saw Grandma approaching, and as Grandma stepped on the front stoop, she peered in as she rapped her knuckles on the screen door, asking, “Is anyone home?” all the while knowing that they probably were.  Telephones had not come to the area yet, so there really was no way of knowing for sure that they would be there, but she was willing to take that chance.

Anita called out, “Come on in, Mom”, so she opened the screen door and stepped through. As usual,  her hands were not empty.  When she came to visit, she always carried a shopping bag weighted down with her homemade baked goods, fresh bread, cinnamon rolls, dream bars, cookies……always something delicious.   When she came inside she set the bag on the table and greeted her daughter with a nod of her head.  Anita gave her a bright smile and said “Hello, Mom”.  Anita had seen her arrive through the window over the sink where she had been washing dishes.  Esther said, “are you interested in making  coffee for us,  if I share with you what is in this bag?”  Brita wiped her hands on her apron and said “I’d love to.  I am sure the girls would enjoy some of the goodies in your bag too”.

Anita put the coffee on the stove to cook while Grandma Esther pulled out dishes from the cupboard and set the table.  Elizabeth and Kate were already seated at the table,  each of them eagerly anticipating this lovely treat about to be served.  Once the baked goods were placed on a plate on the table and the coffee was poured, Mom and Grandma began visiting and sharing the latest news. The girls mostly listened because they enjoyed hearing their banter about what was happening in their little community. 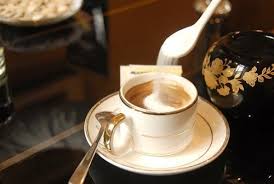 Elizabeth always begged for coffee because she was impatient to be a grown up, and since Kate copied everything Elizabeth did, she wanted some as well.  So, Grandma would pour a splash of coffee in each of their cups, then filled them up to the top with milk and a spoon of sugar.  The girls loved listening to their Grandma and Mother visiting.  It was as if they were all a part of a secret society.  They were always told to not share this conversation with anyone beyond their home and they never did.  They liked that they were trusted with some of the secrets they heard Mom and Grandma sharing.

Time passed quickly, and soon they could hear the crunch of the tires of Grandpa’s car as he came to pick up Grandma Esther.  Grandpa Artie was the best!  He was pretty quiet, but they knew he loved them a great deal.  Often they would plead to ride back to Grandpa and Grandma’s house to spend the night, but when they made the request this time, Mother said “Not today” because Vacation Bible School was still in session and they needed to get up early tomorrow.  Hugs ensued and then Grandpa and Grandma left for home.  The bag of goodies remained and they knew they would find something special in their lunch bag tomorrow.

They knew Grandma Esther felt blessed to have them as Granddaughters, for they were the only ones she had and this made them feel very, very special.  Elizabeth and Kate knew they were blessed to have Grandma Esther too!  Three generations of women having coffee and dessert on an afternoon accompanied by laughter and talk.  Life just couldn’t get any better.