It was a beautiful sunny October day in Texas today.  There was an autumnal freshness to the air and the

bright blue sky was filled with billowing clouds floating by on the soft breeze.  Life felt like a gift on a day such as this.  We could hear music playing in the distance and the melody was so pleasant to our ears,  we decided to walk towards the sound to see what was going on.  As we got closer we could hear people singing along to the music which was interspersed with occasional ripples of laughter and clapping.  It sounded like a family/friend festival of sorts and I was imagining a most beautiful scene as we rounded the corner.

As we approached the gathering, we could immediately see that the scene was much different from the picture my mind had drawn up for me when I heard the first notes of music wafting down the street.  I had envisioned a beautiful park with a band shell  full of instrumentalists and singers. I had also imagined chairs and blankets spread out on an emerald green carpet of grass and everyone sitting about in lovely Sunday dress.

What we saw instead was a group of musicians standing on pavement playing their instruments and singing in front of a big white truck which was pulled up alongside the edge of a big parking lot under the Interstate Highway Bridge.  The band was playing in front of an assorted crowd of people who were sitting on folding chairs around many large round tables facing the band.  Instead of the usual special Sunday attire one thinks of  when attending church, these people had mismatched clothing in various states of cleanliness and disrepair.  Some of the people were alert and attentive and happily clapping to the music, while others were slouched down in their chairs watching and listening quietly.  Some were sitting on a curb or on a grassy spot.  Some were sitting on a backpack which contained the sum total of all their worldly possessions.  The crowd included all the generations one would normally think of at a Sunday Church Service, and as we took part in serving the crowd, I thought about the families to which these people once belonged, and who, for one reason or another, are no longer connected.  I thought of the family’s who may not know the whereabouts of their son or daughter….sister or brother…..mother or father.  To our surprise we saw some h0meless children there as well, sitting by their Mother or someone who appeared to be their Mother.

This is Austin Texas and this was “The Church under the Bridge”, which is put on every Sunday by various churches throughout the city.  These churches bring music, singers, and a preacher to the place where this sector of society collects.  They bring along volunteers who serve hot breakfast tacos, banana’s, sweet rolls, orange juice and coffee.  The volunteers have tents set up where there are boxes of donated clothing the homeless can  sift through to see if there is anything in them that will be useful to them. 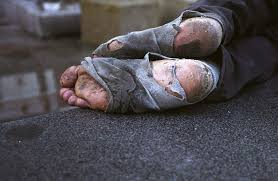 There were 6 volunteers who were sitting on chairs opposite 6 homeless people, washing their feet, cutting their nails and attending to sores and blisters.  This was a very popular line and one has to think that the need for human loving touch was as great as the need to have their feet attended.

I thought of my family today.  I thought of my parents who loved me and raised me.  I thought of my children who were blessed to be raised in a home with a set of loving parents.  I thought of my husband who had a wonderful work ethic and a strong sense of responsibility which provided so well for our entire family.  I thought of the roof over our head and the food on our table and our nice soft beds.  I thought of our hot shower and plentiful soap and shampoo.  I thought of the immense blessing to us that none of our children were afflicted with mental illness or drug/alcohol addictions which could have landed them as one of the multitudes of homeless in this country.  Surely, there are loving, caring families out there that have no idea where their loved one is at this moment, and because of this, are unable to come to their aid.

As I watched the crowd, I imagined how once upon a time, a new mother may have cradled a brand new infant in her arms with great expectations and dreams for that child’s future.  I thought about how it was possible we may have met her grown up baby today in the form of a worn out, sleep deprived, malnourished man or woman.  I thought that perhaps while we were meeting her grown up child, it may be possible that her Mothers heart is broken along with the dreams she once had for her child.

Today, a homeless man walked by with a bright red shirt that had these words printed on its back, “Only God should be my judge”.  Indeed, Sir, indeed!

Our church service wasn’t in a building with a steeple today.  It was under a bridge where the noise of rushing traffic overhead mixed in with the music of the instruments and the singing voices of the church service.  It gave us a view into another world, far and apart from the one we normally move about.

The homeless got food for their tummy’s today.

The homeless got food for their spirit’s today.

(Al and Juanita got a lot of food for thought!)