Because I am a very social animal (emphasis on social, not animal…😏 wink-wink), I love being in communication with people…most particularly family and friends. As the world has evolved, I have evolved with it.  As the years have gone by, more and more ways have become available to communicate with family and friends. Growing up, I lived in a very rural and remote area of the country, and hard as this is even for me to believe, I remember life before phones. Yes, indeed! Those were the days when conversations occurred in person and face to face, or written on paper in the form of a letter. It wasn’t until I was in my 40’s that I became aware of a new invention, (to me, anyway)…which was the computer. Shortly after, another new form of communication arrived on the scene and it was called e-mail.  A few years later arrived video talking, (Skype) followed by texting, Facebook, and a myriad of ways in which one could be in contact with our loved ones.

One of my very biggest pet peeves in the midst of all these choices of effortless communication is when someone chooses to not respond to an e-mail or text. I mean, seriously,  can anyone REALLY claim they don’t have time to type “thanks for the note” or “busy right now, catch you later”, or even a “thumbs up?”  Responding to a message, however briefly, is the POLITE way of using technology in a relationship. Far too often when I have texted or emailed certain family members, it will go into cyber space and they do not bother to respond!!! Fortunately most of our family members DO respond, but the ones who do NOT respond make me feel like my time spent contacting them was a mistake and a big waste of my time! My time is valuable too, so when I do not hear back, I take that as a message in and of itself. The message I get is that I don’t warrant even a minute or two of your time or you are just not that interested.

Let me be clear on how I think about this. First of all, to have a text or email ignored feels no different than to be ignored by someone when I say “Hello” to them as we pass one another somewhere. Fortunately, this scenario doesn’t happen very often because “in person” most people feel pressured to “own” their behavior. Somehow, though, when it is written or typed and sent, the receiver can choose to ignore it, not really caring about the impression felt at the other end.

In our home we have made a decision…..if you are too busy for us, we will feel sad but we will accept this as how you want things to be. However, our life’s clock is ticking too, so we will save our efforts and we will respond in kind. Hence, we will give back what we get. We won’t be keeping score, but we are NOT interested in relationships where we keep putting ourselves out there to someone who shows no interest or respect! No hard feelings, really. It is just good to understand how things are with anyone, so we can move on and spend time with those who DO honor us and want to spend time responding to us. After all, fair is fair!

So, while we will never be the one who cuts the cord in a solid relationship, we also choose not to invest in a situation where there is no return. Can you imagine putting all your money into an account where you kept drawing out of it and never got any return? I would say you would move your money to a better place where your return is much better and more satisfying!

Feeling ignored by someone stinks and only a fool will keep going back for more of the same if what you are getting is nothing! So, as the New Year approaches, our resolution is…

“We’re gonna separate the chaff from the wheat, 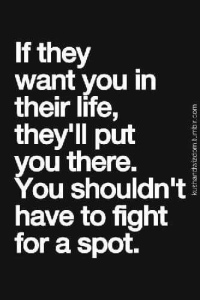