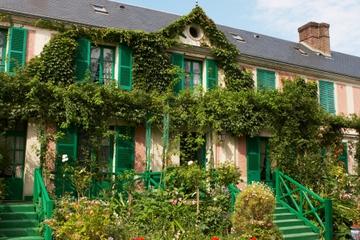 When HGTV first came out with a show called House Hunters and a whole host of other programs dedicated to house and home, I became quickly addicted.  It was fun be a voyeur as we went along with a couple while they toured various properties, (usually three) and then had to make a decision on which one to buy at the end.  It was also fun watching various redecorating programs while we learned the latest techniques on how to update an old house.  But what got to be annoying after a while was that so often, we would watch young couples walk into a house and begin to snipe about it.  “This room is too small.  I don’t like the color.  I can’t use that closet.  We will have to “gut” the kitchen, or bathroom, or, or, or.”

It did not take long before these shows became boring and irritating.  Why?  Because they basically gave credence to the fact that very few people dare to be different.  Time and again we would hear them ALL say they wanted “granite counters, stainless steel appliances, wood floors, and then (the worst new house buying term), the “man cave”.  Honestly?  Really?  We live in a world where everything seems to be falling apart at the seams and these young couples decide they “just can’t live here” because they do not like the material the kitchen counters are made of?

I don’t know when this phenomenon started, but, in my mind, it has become a societal illness of the worst kind in the U.S.A. We want the best of the best and the latest of the greatest because we don’t have the sense to understand that being content is the ultimate of good feelings and good health.  On and on these networks churn out these shows where it convinces the viewers that they are not good enough IF they don’t have this or that, and as a result, our society has become ensnared in a materialism of a magnitude never seen before.  Everyone wants NEW!  I wonder… do they realize that houses fall into the same category as cars?  The minute you turn the key in either one, the clock is ticking away at its newness.  The same is true for remodeling.  Nothing stays new, and besides,  whoever said that new was better than old anyway?

When my husband and I were in France, we had the opportunity to see Claude Monet’s house and garden which became his property in 1883 in Givemy, France.  He was a wealthy man by the time he died, so he owned a beautiful, two story brick home that sat in a lush, landscaped surrounding.  Because of it’s large size, it had to have made a spectacular impression in its day.  Even today, almost 125 years later, it is STILL spectacular because it hasn’t changed very much in all these years.  Instead, the estate managers chose to preserve it rather than update it.  As Al and I walked around this home, my heart responded to the homey feel within.  The house was filled with a lot of painted wood and a lot of bright blue and white tile on its walls, with a dominance of yellow throughout, perhaps to give the feeling of sunshine within.  This place spoke to me because it was NOT new.  I could feel the history and spirit of its inhabitants all around me.  As we traveled in Europe, a common and repeated theme we witnessed was how so many of these societies have embraced their past in the architecture of their churches, government buildings, commercial buildings and even in residential homes.  Certainly, very few buildings were the “latest and the greatest” as it is so much of the time in the U.S. The very few new places we visited felt void of the personality of its older buildings. 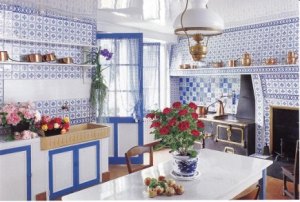 I, for one, will paint to refresh but I will not fall prey to replacing what is perfectly good just because someone else says “its time”.  So what if a home is “so 70’s!   (Or so 80’s, or 90’s or whatever).  When my husband and I were young and newly married, we would go and look at homes and even then, over 40 years ago, I was never really taken in with the new.  I always fell in love with the look of the older architecture but can’t really explain why this is so, any more than someone can explain why they prefer waltzes over the tango.  You just know when something is “speaking” to you.

To each his own, I guess. In my opinion, there is really no point in trying to stay ahead of the train wreck that these days is called home decorating.  I want to watch my home grow old as I grow old within its walls.  I enjoy watching new housing going up all around us in one of the fastest growing cities in the United States and not caring a whit that they are newer, larger, of the most modern design, and have every amenity under the sun.  In the end, when it comes to anyone’s property,  we can’t take it with us,  so it is better to enjoy your surroundings for all the right reasons.  Surround yourself with the things YOU love, NOT what someone says is “in”.  Home sweet Home is only sweet if you feel a measure of contentment in living there.  Whether you are rich like Claude Monet, or of modest means, it is good to treasure what life has blessed you with.  Don’t concern yourself with what others have versus what you have.  Every home is lovely if it reflects the true personality of the people who live within.

Focus on that hot steamy cup of tea at your old kitchen table, as you take in the early morning view of your old rose bush, heavy laden with dew. Focus on the sounds of the birds singing in the trees.  Focus on how lovely the fire looks and feels in the hearth that graces your beloved home.  Focus on the blessings, not on the wants, and you will find  true contentment!

The only way way to be!